Delhi, the capital city of India boasts of all major government offices and buildings in India. Additionally, It is also popular for its enriched culture and heritage. Ranging from age-old heritage buildings to new spanking huge malls and offices, Delhi has a mixture of everything. However, many people don’t know that Delhi/NCR also plays host to many of the top IT companies, therefore, making it a city for everyone. 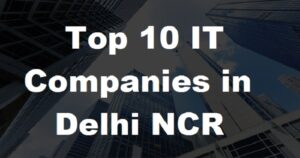 Headquartered in Mumbai, TCS is the largest Indian company by market capitalization. Currently headed by Rajesh Gopinathan, TCS has a presence in 149 locations across 45 countries in the world. In fact, TCS is now considered among the most valuable IT services brands worldwide and also is rated in the top 10 IT companies in delhi ncr, India.

An Indian multinational corporation, Infosys provides services like consulting, outsourcing, and information technology. It was established in the year 1981 and is currently headed by Salil Parekh. Bangalore is the headquarter for Infosys. It is also rated in the list of top 10 best IT companies in India.

Accel Frontline Limited, which is now known as Inspirisys Solutions Limited is a Chennai based IT company. They provide services in the areas of Enterprise Security, Cloud, Internet of Things, Infrastructure and Product Engineering. The company was incorporated in the year 1991 and is currently headed by Malcolm F. Mehta.

Delhi based company, CMC Limited was established in 1975. They provide services like IT services, consulting, and software. However, CMC merged with Tata Consultancy Services in the year 2001 and is now a part of the TATA Group.

Founded in 1975 by Bill Gates and Paul Allen, Microsoft is one of the largest IT companies all over the world. They are the pioneers who gave us the user-friendly Microsoft Windows. In addition to that, the best-known software products of Microsoft are Microsoft Office and Internet Explorer. As in 2016, it was the largest software maker by revenue in the world and it also ranks at No. 30 in the 2018 Fortune 500 rankings.

NIIT Technologies is a leading global IT solutions organization serving customers in Banking and financial services, Insurance, Travel, and Transportation sector.
It was Founded in 2004 in Noida, India and is currently headed by Sudhir Singh. The company has around 10000 employees serving clients in 18 countries.

Oswald Labs formerly known as Oswald Foundation is an India and Netherlands-based accessibility technology company. They build products for people with disabilities. However, their main areas of focus are enterprise web accessibility, smartphone apps, and a startup accelerator. Oswald Labs was formed in 2016 and is currently led by Anand Chowdhary.

Cadence Design Systems Inc. is an American multinational software and engineering services company. Founded in the year 1988, Cadence Design Systems has its global headquarter in California, US. The company produces software, hardware and silicon structures for designing integrated circuits, systems on chips and printed circuit boards.

Adobe Inc. is an American multinational software company with its headquarter in California, US. Established in 1982, Adobe initially focused only on the creation of multimedia and creativity software, and later on entered into Digital Marketing. Notably, the most famous products are Adobe Photoshop, Adobe Flash, PDF. Shantanu Narayen is the current CEO of Adobe Inc.

Founded in 1977, Oracle corporation is one of the biggest software companies in the world. Headquartered in California, US, Oracle Corporation sells database software and technology, cloud engineered systems, and enterprise software products. Mark Hurd and Safra Catz are the current CEO’s of Oracle Corporation.