The Craze For Cricket is Humongous in India. Read to Find Out Why

No other sport in India is celebrated as much as Cricket. From Ricky Ponting to Greg Chappel and the late Shane Warne, all have all accepted that Indians make Cricket a larger-than-life experience for the players on the ground.

The claim gained more ground during the pandemic when all sports went down to a sudden halt due to the raging infection of COVID. Confused and flustered, people rushed online to get a taste of fantasy cricket so they could enjoy the game in some format. The maximum recorded users of the apps all came from India. Only if you lived under a literal rock would you miss out on this crazy phenomenon, but if you did, click here to know more about the game.

In the list below, you will find the definite reasons why Indians find so much comfort in this game and celebrate it around the year. 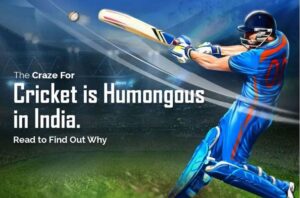 To play Cricket, you need two groups of determined players; a bat, a ball, and a couple of wickets with a decent enough ground area to set up the game. So the cost to play Cricket is nothing, but the payback is terrific in terms of the joy and camaraderie you enjoy that makes the game live up to its popularity.

The rules for playing are also simple; any player can learn them after swinging the ball a couple of times. The best Cricket in India is played in the streets, and the most iconic players in today’s international Cricket were first sourced from the streets and bylanes and polished to perform for the national team.

The game on the streets is quite different, and you learn the basic skills and tricks that most professional players often use in official matches. For example, a tennis ball or taped ball is used in gully cricket, contrary to a leather ball which is the international standard ball. It is challenging to learn to play with a tennis ball as the spin and pace are unpredictable, and it turns you into a more clever player of the game.

India has the most dedicated Cricket players, and as a result, it has been able to get victories in the most challenging formats of the game. The national team players are very flexible, can mutate to any new game style, and show significant commitment in all matches. As proof of their adaptability, India won the inaugural T20 tournament in 2007, where the game was just for 20 overs and fast and unpredictable. Other than this, the team has performed at its best and won two world cups in 1983 and 2011.

These performances make the players heroes to the young crowd and motivate them to take more interest in the game. In cricket camps, you can see young players mouthing the name of their idols more readily than in their class lessons. This is precisely how tournament victories grab the future rising cricketers of India and fuel their ambitions.

IPL, or the Indian Premier League, is an intense format of short-overs based Cricket in the world now, with cricketers from abroad hustling to join the best teams. The win of India in the first T20 promoted the start of this league, and since then, it has become a major crowd sensation. The top cricket-playing states in India have their team of super players playing the game. The team with the most wins in this tournament is Chennai Super Kings, who have grabbed the maximum trophies in all the games. Because fans from different states back the IPL, new people from these places who were indifferent to the game have found a developing interest and association since the teams hail from their cities.

Famous bollywood stars are owners of the top teams, and by default, the game gets a more star-studded appeal to ordinary people, especially the youth. Due to IPL, even remote areas of Bhubaneswar and Ranchi have been exposed to the world of Cricket.

There comes a time when players rise to the level of gods through their display of talent and skill in the game. Sachin Tendulkar, Sunil Gavaskar, Raul Dravid, Kapil Dev, and Anil Kumble, among others, are legends that are all part of Indian cricket history. However, Sachin Tendulkar is ranked as a demi-God of Cricket with his skills on the bat and is acknowledged by the older legends and his contemporaries equally.

When comparing players, every star player from abroad has a challenging counterpart in the Indian team, which shows the strength of the entire battalion. The best captain as of now on the International level is MS Dhoni going above the likes of Ricky Ponting and Fleming. This is an immense inspiration to the upcoming players who can be guided by their achievements and unique style of play.

Cricket is the best sport in India, and every kid is immersed in the game as much as the oldest adult. The fans of Cricket only seem to grow in number as years roll on. Online games also have a massive impact on how the masses accept Cricket in this new decade. In the recent World Cup, India has shown good form in the past years to be placed in the top three on the board showing even more commitment than ever. For India, the future of Cricket only looks brighter and better in the years to come.