Controversial Chinese video app Zynn has returned to iOS and Android after being booted from both platforms following reports of plagiarism and complaints about a pay-to-watch system that one media watchdog described as a “pyramid scheme.”

Zynn is back on the Google Play Store! We want to thank everyone for their patience and support. https://t.co/CBRBG5cPfr#Zynnapp #Zynn #GooglePlay pic.twitter.com/X1BV8hwf0g

The app returned to Google’s Play Store on July 2nd and Apple’s App Store on July 16th, but users are frustrated by the changes it’s made, particularly to the reward system that helped boost Zynn to the top of app download charts earlier this year. The app previously offered users cash or gift cards for simply signing up, watching videos, and referring friends. Now, this cash system has been replaced with a system of “Zynncheers” points. And what are Zynncheers points good for? Nobody knows, including Zynn.

The company introduced the system in June and seems to have swapped any cash users had accumulated but not yet redeemed for points. These points are a “type of credit representing community activity level,” says Zynn, which users will be able to receive “benefits” for. But what these benefits are and how they can be redeemed is unclear. 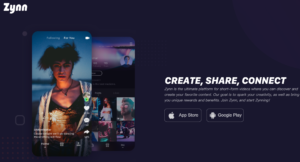 On social media, Zynn users have been responding to the company’s posts to vent their frustrations, complaining that the main function of Zynncheers seems to be stopping them from cashing out any money they’d previously accumulated.

“What are Zynn cheers for? Just wondering lol,” says one user. Another asks: “can zynncheers be useful already, i need money.”

On the Google Play store, the reviews are more specific in their grievances. “The sole and only reason that 90% of people downloaded this app for is money,” says one user on July 18th. “But ever since they added zynncheers the app has become useless … They said that they are finding uses for zynncheers but it’s been a long time and they are still worthless.”

Zynn says it’s working on developing Zynncheers, but hasn’t offered any solid updates on the scheme in recent weeks. We’ve reached out to the company to ask for more information and will update this story if and when we hear back.

In the meantime, users are abandoning the app or moving on to pastures new. In a Facebook group where Zynn users previously shared referral codes and swapped tips on how to accumulate cash quickly, people are either bemoaning the app’s demise or hawking new video apps that promise their own get-rich-quick cash reward schemes.

“I’m inviting you to join Cash Crates, a site that lets you earn money with social media. I just earned $54.00 and you can too! Sign up today for a $25 bonus!” says one post. Another user replies: “lmao are u dumb ?”